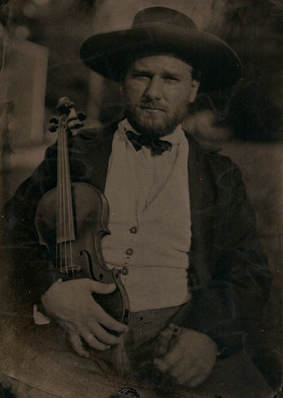 " Jake Book is a old time musician, documentarian and songwriter from the wild midwestern state of Iowa. Growing up on a farm in the rolling hills of the southern part of the state, Jake learned about the banjo from his mother who played in the old frailing style. His mother also introduced him to many of the bluegrass icons such as Bill Monroe and Ricky Scaggs. This would stick with him while he learned to play guitar at age 10.

He grew up on the road with his parents attending historical reenactments focused primarily on the French and Indian War and Revolutionary War, something he is still very active in today. He developed a strong sense of history and heritage. During this time he was inspired by the music of Father Son and Friends and played with them around many campfires at reenactments across the country.

Jake has travelled extensively educating people on America's history through Living History and Reenactment as well as through the music of our ancestors from the British Isles and Early America. His music comprises ballads from Ireland and England, Fiddle Tunes from the Deep South, Appalachia, Canada and the Midwest and Banjo Tunes from the Coal Mines of East Kentucky to the Gold Fields of California.

Since founding Historic Records in 2011 , Jake has become a documentarian and field recordist, traveling to several states meeting with people like Arthur Rosenbaum and Frank George among others. He also began a video series called "Kitchen Songs" that have featured such artists as Dom Flemons, Pokey LaFarge and The Tillers. Through these experiences he has learned about the music in a deeper way and continues to do so.

PRESS/TESTIMONIALS
"Jake book is a fine banjo player with a love and understanding of Appalachian and Irish traditional music. He is a creative songwriter and strong performer. The young man is also a wonderful singer."
-Burr Beard FOOTMAD Arts Administrator, VP Programming, WDXB-FM

"I received the CD today and just listened to it with some volume on a decent system - it is a first class piece of work! Both yourself and Cllifton's love of the music shines through and it's lovely to hear the tradition in the safe hands of another generation."
-Dr. Lawrence H. Holden, Visiting Research Fellow, School of History and Anthropology, Queens -University, Belfast

"Clifton Hicks and Jake Book's recording "From the Hills and from the Plains" is the real deal. While some of today's Old Time musicians do not quite have the authentic feel to their music these guys do.  Their music has the vibe of having been passed down from the older musicians."
-Andy Holmaas, "The Old Time Railroad" www.alleghenymountainradio.org

Write up in CincyMusic

In July of 2014 Jake finished 3rd in the Banjo Competition at the Morehead Old Time Music Festival in Morehead KY.